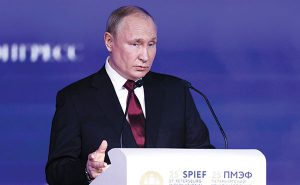 The secretary of Russia’s Security Council threatened retaliation in a growing standoff with the European Union after Lithuania blocked the transit of sanctioned goods to the Baltic exclave of Kaliningrad.
Russia “will certainly respond to such hostile actions” and appropriate measures will be taken soon, Nikolai Patrushev, a close ally of President Vladimir Putin, said Tuesday in comments from Kaliningrad shown on state TV. “Their consequences will have a serious negative impact on the population of Lithuania,” he said.
The Foreign Ministry in Moscow said it summoned EU Ambassador to Russia Markus Ederer to issue a “strong protest” and demanded the immediate restoration of transit services to Kaliningrad, which is sandwiched between Nato members Lithuania and Poland. The EU disputed that Ederer was summoned, saying he’d gone to the ministry to explain the measures.
The escalating confrontation comes four months after Putin’s Feb. 24 invasion of Ukraine triggered Europe’s worst security crisis since World War II. The US and the EU have responded by pouring weapons into Ukraine to assist Kyiv’s forces fighting to turn back Russian troops, and also imposed unprecedented sanctions that are placing growing pressure on Russia’s economy amid an exodus of foreign investors.
The restrictions that came into force on Saturday affect as much as half of all transit goods transported to Kaliningrad via rail through Lithuania, according to local authorities in the Russian province. Delivery of goods continues by air and by ship to Kaliningrad, a former German territory that was seized by the Soviet Union in World War II.
The government in Vilnius halted transit deliveries in line with EU sanctions barring the supply of steel and other ferrous metal products from Russia. The list will be expanded to include cement next month under a program of measures agreed in March.
The pressure will gradually intensify as an EU ban on coal shipments from Russia takes effect in August and on gasoline and diesel supplies several months later, Kaliningrad Governor Anton Alikhanov said in a video address on his Telegram channel. Still, he sought to downplay the impact, saying supplies are being re-routed by ship from St. Petersburg, with the first cargo vessel due to leave on Friday.

‘No Blockade’
“There’s no blockade of Kaliningrad,” Lithuanian Prime Minister Ingrida Simonyte said. “Transit of all other goods that are either unsanctioned or are not yet subject to sanctions is taking place, as well as transit of passengers under a special agreement between the European Union, Russia and Lithuania.”
Even so, the Russian Foreign Ministry warned Lithuania’s Moscow envoy on Monday that it may “act to protect its national interests” unless rail transit is unblocked.
Russia “may continue frightening the European countries with its military means, but let’s not lose the ability to see the distinction between disinformation, propaganda and real possibilities,” said Lithuanian Defense Minister Arvydas Anusauskas.
Russia’s Baltic Fleet, which has just held 10 days of large-scale operational exercises, announced Tuesday it will conduct artillery firing, mine-laying and anti-submarine missions in the Gulf of Finland, the Interfax news service reported.
The situation is “very painful” for Russia because the EU sanctions are now impacting its sovereignty over Kaliningrad, said Fyodor Lukyanov, head of the Council for Foreign and Defense Policy, which advises the Kremlin.