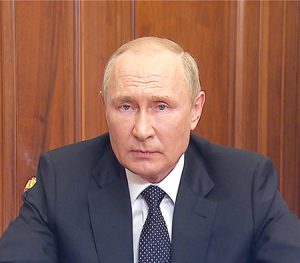 Russia vowed to go ahead with the annexation of the parts of Ukraine that its troops currently control after UN-condemned votes, putting the Kremlin on a fresh collision course with the US and its allies.
Russia will sign treaties to absorb the four regions in eastern and southern Ukraine at a Kremlin ceremony at 3pm Friday, President Vladimir Putin’s spokesman, Dmitry Peskov, told reporters on a conference call Thursday. Putin will also make an address to legislators and other officials, he said.
Authorities are planning a Red Square concert to celebrate Friday evening, though Peskov declined to comment on whether Putin will attend. The final formalities of annexation, which much of the world has said it will reject, are expected to be completed next week after legislative ratification. Boosting pressure on Kyiv and its allies, Putin has threatened to use “all the means at our disposal” to defend Russia, a signal he may use nuclear weapons to protect the lands he’s annexing.