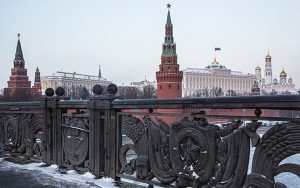 The son of Russian President Vladimir Putin’s top domestic policy adviser was appointed the head of the country’s biggest social network after Gazprom PJSC-linked companies bought a controlling interest in it.
Vladimir Kirienko, 38, who was previously a first vice-president at state-owned Rostelecom, has been named chief executive officer at VK, the company said in a statement.
He replaces Boris Dobrodeev, who announced his resignation. Dobrodeyev’s father is a top executive with state television.
Kirienko’s father, Sergei, is first deputy chief of staff of the Presidential Administration and responsible for domestic policy. He is sanctioned by the US and European Union over the poisoning and jailing of opposition leader Alexey Navalny.
The management shift comes after two Gazprom-affiliated companies bought control of a company that holds 57% of voting shares at VK, the group formerly known as Mail.ru.
VK has lost about a third of its value since the first stake was sold in November.
“We are confident that his experience, enthusiasm and level of energy will ensure
that VK will strengthen its leadership among the Russian ecosystems,” VK co-founder and Chairman Dmitry Grishin said in the statement.
Russia has been increasing pressure on foreign technology companies amid a broader crackdown on anti-Kremlin opposition this year. Companies including Meta Platforms Inc, the parent company of Facebook and Instagram, and Alphabet Inc are facing the prospect of bigger fines if they refuse to delete content the government deems illegal.
Apple Inc and Alphabet’s Google agreed to remove an app, called Smart Voting, designed to help protesters vote out ruling party politicians, after authorities accused them of meddling in parliamentary elections.
This year, Twitter Inc was hit with measures that made it slow to load for failing
to delete content, while internet watchdog Roskomnadzor blocked access to several
virtual private network providers for allowing access to “prohibited” information and resources.
An insurance group part-owned by Gazprom PJSC and Yury Kovalchuk, a sanctioned ally of Putin, bought a 45% stake in a company that controls the majority of voting shares in VK this month. Gazprombank, which is affiliated with the state-owned gas export monopoly, in November bought a 36% stake in the firm, MF Technologies.
Gazprombank subsidiary Gazprom Media said its parent would transfer a 45% stake in VK to it.
Gazprom Media has long been part of the Kremlin’s strategy to control the media, though the company says it’s independent. In 2000, at the start of Putin’s first term, it took over NTV, then the country’s largest private television station. The move drew criticism from international media and local journalists that the president was using the state’s power to stifle free speech.