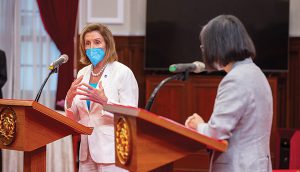 House Speaker Nancy Pelosi’s swing through Asia aimed to convey the US’s “strong and unshakable” support for the region. It ended up leaving many countries in stunned silence as China conducted unprecedented military drills around Taiwan.
The shockwaves from the highest-level US visit to Taiwan in a quarter century are still reverberating around the region days after she flew back to Washington. China’s military has extended exercises designed to show an ability to encircle the island and cut off the Taiwan Strait, one of the world’s busiest trade routes, days after launching missiles that likely flew over Taipei and into waters Japan claims as an exclusive economic zone.
On its own, such a display would normally generate widespread condemnation of China. But many governments also saw Pelosi’s visit as a step too far — and they don’t want to get caught in the middle.
While longtime allies Japan and Australia joined the US in criticizing China’s response, other security partners in the region stayed quiet. South Korea’s leader snubbed Pelosi after the visit, India hasn’t said a word and members of the Association of Southeast Asian Nations rushed to reaffirm that they only recognize One China —a basic framework that Beijing requires for diplomatic relations, although interpretations vary across nations.
“Most Southeast Asian countries will view the United States as having provoked China’s entirely predictable overreaction,” said Shahriman Lockman, a director at the Institute of Strategic and International Studies in Malaysia. “The lesson for Asean members here is that you will have to continuously hedge your bets. There is no telling whose actions might precipitate the next crisis in US-China relations.”
Since taking office, President Joe Biden has sought to build a broad coalition in Asia to push back against Chinese overreach, in part, by telling smaller economies they don’t need to pick sides. That marked a stark contrast with the Trump administration, which pressured countries in the region to ban Chinese telecoms giant Huawei Technologies Co. and take other steps that would effectively force them to choose between the world’s biggest economies.
The Indo-Pacific Economic Framework, unveiled by Biden during a visit to South Korea in May, was emblematic of the approach. While the IPEF launch excluded China, the US managed to sign up seven Southeast Asian countries as well as Fiji by insisting it was open to Beijing and leaving out Taiwan, even as the administration began parallel trade discussions with the island’s government.
Those talks, while short of a full-fledged trade agreement sought by many in the region, signaled a more robust US leadership presence in Asia to counter China in a way that was palatable to nations that need strong trade ties with Beijing to boost their economies. They also complemented other US initiatives to counter China, including introducing an alternative to President Xi Jinping’s Belt and Road investments, as well as a push for stronger ties on trade, public health and cybersecurity.
Yet all of a sudden, after months of trying to make it comfortable for countries to align with the US, Pelosi’s visit forced Asia to take a stand on China’s most sensitive issue of all. And many governments just put their heads down.
Asean put out a statement urging “maximum restraint” and reaffirming its support for a “One-China Policy,” with Cambodian Foreign Minister Prak Sokhonn —whose country is currently chairing the group — indicating that Pelosi was to blame for triggering the tensions.