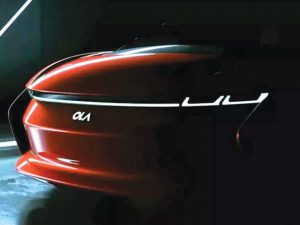 Bhavish Aggarwal, who founded India’s top ride-hailing startup and then moved into manufacturing electric scooters, is expanding his business empire again, unveiling plans to enter the electric-car market in competition with local giants like Tata Group and global automakers from Hyundai Motor to Tesla.
The 36-year-old entrepreneur said that Ola aims to launch its first electric car in the summer of 2024 with a 500-kilometer range. It plans to make its own lithium ion batteries, bringing down costs with local production. The goal is to forge a path towards self-reliance in the relevant technologies and then produce a made-in-India electric vehicle (EV).
The futuristic-looking vehicle, with an all-glass roof, will be part of Aggarwal’s Ola Electric Mobility Pvt. His earlier startup, ANI Technologies Pvt, runs the Ola ride-hailing operations.
Aggarwal, whose backers include SoftBank Group Corp. and Tiger Global Management, announced the vehicle on a day India celebrated completing 75 years of independence from the British rule, and exactly a year after Ola’s electric two-wheel scooter was introduced.
In a sign of how crowded the market has become, Mahindra Electric Mobility Ltd., part of a storied Indian conglomerate, plans to unveil a series of its own EVs the same day, according to local media. Aggarwal has been tweeting teaser videos of a red car with only its rear wheels visible, ahead of the announcement.
Ola is pressing ahead with plans to earn what Aggarwal has called “a seat at the global EV table.” Last year, he unveiled what was billed the world’s largest electric-scooter plant at a site about three hours from its headquarters in Bangalore.
The goal was to pump out about two million scooters annually, but plans have been marred by delivery delays, quality issues and, in some cases, scooters catching fire.