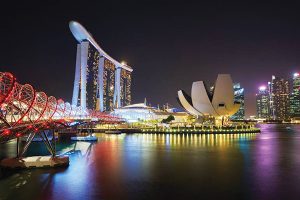 Singapore’s property market is in the throes of a 2008-type mania, with landlords squeezing tenants for the last possible cent. The previous bout of frenzy ended with the collapse of Lehman Brothers. This time, too, stratospheric apartment rents will return to earth, though the process is unlikely to be as swift as the city-state’s expat community might hope for.
Among major global cities, Singapore tied with New York for the dubious distinction of the fastest rental increase in first half of 2022. But the pain for tenants isn’t over yet.
To see why, consider the problem from the landlords’ perspective. Mortgage costs of 2.4% — a 1 percentage point premium over the 3-month Singapore Overnight Rate Average — are double what they were a year ago.
During the pre-Lehman property craze, variable mortgage borrowing costs were declining. Now they’re surging. As the US Federal Reserve pushes its policy rates even higher, landlords will want to earn at least 3.5% annually on their purchase cost. However, 3%-plus rental yields on a new investment can only be found in the eastern or western suburbs, or in the northern parts of the island — close to Malaysia.
Home values around the central business district, preferred by expat tenants, have gotten so expensive that yields have compressed: Rents there will have to rise more to make the math work for homebuyers. Higher asking rents will find plenty of takers in a tight market. But they will pinch bankers and executives returning to the city as economic activity normalises after the pandemic. PropertyGuru Pte. says that based on converted sessions on its portal — when house-hunters leave the listing page to inquire about the properties — leasing demand in the so-called core central region is back. Although rents in this pricey neighborhood jumped 7.7% in the second quarter, they’re still playing catch-up.
The other reason why tenants mustn’t hope for an early reprieve is Hong Kong. Singapore’s swift post-pandemic reopening has bolstered its appeal, even as its rival financial center’s half-measures — like cutting a mandatory hotel quarantine for visitors and returnees from seven days to three — make living in the special Chinese administrative region a frustrating experience. As Hong Kong shrinks — the 1.6% drop in its population in the 12 months to June was the worst in at least six decades — Singapore has to bulk up. That will need require some readjustment in its housing market.
During 2020 and 2021, household formation in the city-state crawled to a near halt as Covid-19 hollowed out the ranks of foreign-born residents. Over at least the last four decades, the only other instance of a freeze this harsh was during 2011-2012 when the government responded to its poor electoral performance by coming down hard on immigration. But while the traditional source of condo rentals — the expat population — waned during the pandemic, local demand waxed. Delays in construction of subsidised Housing and Development Board flats had young Singaporean couples temporarily renting HDB flats from others.
When that narrowed the affordability gap between public and private housing, some of the pent-up demand spilled into the condo market.