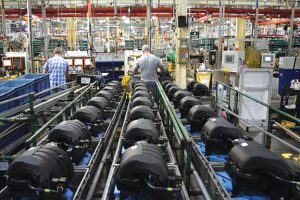 A gauge of New York state manufacturing activity plunged by the second-most in data back to 2001, with sharp declines in orders and shipments that indicate an abrupt downturn in demand.
The Federal Reserve Bank of New York’s August general business conditions index slumped more than 42 points to minus 31.3, with the drop just behind that seen in April 2020, a report showed. A reading below zero indicates contraction, and the figure was far weaker than the most downbeat forecast in a Bloomberg survey of economists.
The share of state factories reporting weaker business conditions nearly doubled in August to 43.6% from a month earlier. Similar deteriorations were evident for orders and shipments.
The report is the first of several regional Fed bank manufacturing numbers set for release over the coming weeks. While the New York figures can be volatile, the magnitude of the slowdown is still alarming and could portend a steeper downturn in manufacturing than previously thought.
The survey likely shows “that industries extrapolated orders from the Covid period and they ordered too much stuff,” said Thomas Costerg, senior US economist at Pictet Wealth Management. “What we’re seeing and what explains the violence in the downtrend is that it seems that manufacturers are seriously re-examining their orders, and I suspect in many cases simply cancelling.”
Stock futures extended their decline after the report while Treasury yields remained lower.
The Fed banks index of orders collapsed to minus 29.6 from 6.2, while the gauge of shipments tumbled to minus 24.1 from 25.3. Both measures, as well as the overall business conditions gauge, were the weakest since May 2020 when the economy was starting to emerge from initial pandemic lockdowns.
Looking ahead, manufacturers in the state were only slightly upbeat. the six-month outlook index improved to 2.1, from minus 6.2 in July.
Meantime, the prices-paid index settled back to the lowest since the start of last year, though the bank’s gauge of prices received edged up and remained elevated.