Nato must dig in for long deployment in east, Romania warns 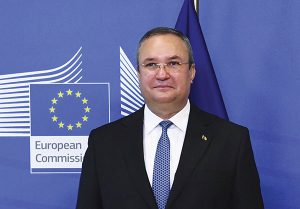 It’s “wishful thinking” to expect relations between Russia and the West to return to their pre-war status soon after the fighting stops in Ukraine, as the Kremlin appears bent on creating a buffer between itself and Nato, Romania’s prime minister said.
Nicolae Ciuca, a retired general who once led combat forces in Iraq, said Russia’s invasion has re-opened a civilizational rift akin to the Cold War, and the North Atlantic Treaty Organization will have to maintain its expanded troop presence on its eastern frontier for at least the medium term.
While he said he didn’t think Russia would attack a Nato country — triggering an open conflict — the current war confirmed more than a decade of warnings from the alliance’s eastern members that President Vladimir Putin is bent on taking back territory once controlled by the Soviet Union.
“Russia is not thinking like us. Russia is not behaving like us,” Ciuca, 55, said in an interview in his office in Bucharest on Tuesday. “The situation now, it seems, is recreating that hole between western civilization and eastern civilization — between free, democratic countries and autocratic regimes.”
Romania, a former communist country of almost 19 million people that joined Nato in 2004 and the European Union three years later, has become a front-line support nation for Ukraine since Russia attacked on Feb. 24.
Its 624 kilometer (388 mile) border with Ukraine is the EU’s longest and the country has raced to rebuild rail lines and refurbish ports to help Ukrainian exports circumvent the Russian occupation and blockade of Black Sea ports. It has also helped more than 1 million refugees who have fled across the border to escape the conflict.
Still, concerns are intensifying that resolve among richer western countries to maintain pressure on Russia via sanctions and continuing the flow of weapons and financial aid to Ukraine may wane as winter approaches.