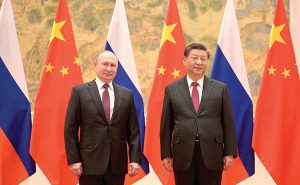 A Nato foreign minister warned that economic reliance on China is risky after what happened with Russia, even as other envoys stressed how Beijing could help push for a deal to end the war in Ukraine.
“We’ve seen what dependence on Russia means to all of us in the West,” Lithuanian Foreign Minister Gabrielius Landsbergis told Bloomberg TV on the sidelines of a second day of a meeting of his alliance counterparts in Bucharest. “I just hope we’ve learned our lesson and not repeat the same mistakes a second time” with China.
The envoys were due to discuss China and how to boost members’ overall resilience on Wednesday. Leaders of the North Atlantic Treaty Organization (Nato) had agreed in June that China posed a “systemic challenge” and warned about a deepening strategic partnership between Beijing and Moscow.
At the meeting in Bucharest, the ministers were expected to adopt a secret 20-page report that analyses China’s military capabilities, politics, new technologies and the role it plays in allies’ critical infrastructure, according to a person familiar with the matter. The report also lists recommendations including boosting resilience, raising awareness in certain areas and maintaining a technological edge in others.
Still, Italian Foreign Minister Antonio Tajani stressed Beijing could play an important role in ending the conflict in Ukraine. “In this moment, China is very important for pushing Russia to an agreement,” he told reporters. “If we want to achieve an agreement on peace, we need a strong action by China, by Mr Erdogan and also by the United States,” he said in a reference to Turkish President Recep Tayyip Erdogan.
Spanish Foreign Minister Jose Manuel Albares echoed those comments, saying China could be a partner when it comes to climate change or to bring peace to Ukraine and speak to Russian President Vladimir Putin. The comments reflect varying views within the alliance about how
to approach China as countries move at different paces, according to an official.
Even as the US pushes for a greater focus on China within the alliance, some allies have been wary that discussions on Beijing could distract from the threat Russia poses along with Nato’s core tasks of trans-Atlantic security, according to a senior European diplomat.
Allies are increasingly aware of the parallels with Russia, particularly in light of reliance on Beijing for microelectronics, supply chains and other goods.

Nato countries must avoid repeating mistakes they made in relations with Russia to ensure they limit dependence on China, alliance chief Jens Stoltenberg said.
“I believe in free trade and member states should continue to trade with China
but we cannot make these decisions only based on commercial considerations,” Stoltenberg, secretary general of Nato, told Bloomberg Television after its foreign ministers discussed issues including China ties and the Russian invasion of Ukraine in Bucharest.
“We’ve seen this issue with Russia, it’s not just a commercial decision, it has to do with our security. Over dependence of resources
on authoritarian regimes like Russia makes us vulnerable and we should not repeat that mistake with China,” Stoltenberg said. He added: “We should assess our vulnerabilities and reduce them.”
Earlier in Bucharest, some ministers stressed that Beijing could help push for a deal to end the war in Ukraine.