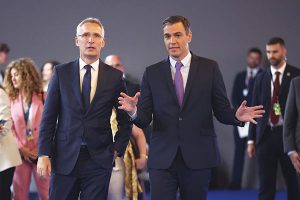 Officials heading to the Nato summit in Madrid are holding out hope of persuading Turkey to allow Finland and Sweden to advance their membership applications.
US President Joe Biden told his Turkish counterpart, Recep Tayyip Erdogan, in a phone call on Tuesday morning that he’s looking forward to speaking to him in the Spanish capital, the White House said. Erdogan was also due to hold talks with Finnish President Sauli Niinisto and Sweden’s Magdalena Andersson on Tuesday afternoon.
Erdogan’s government, which has the power to veto the accession of the two Nordic countries, may agree to Nato pursuing the membership bids, on condition they crack down on Kurdish groups that Turkey views as terrorists, extradite suspects and lift arms embargoes, according to two Turkish officials. Turkey could still block the procedure in future if it is not satisfied, they said.
“I’m neither optimistic nor pessimistic,” Niinisto told reporters in Madrid. “The general view appears to be the talks went better, which would seem to mean somewhat more understanding on both sides.”