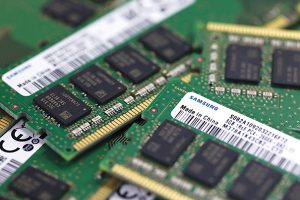 South Korea’s exports of its most lucrative memory chip fell by the most since 2019, indicating a deepening slump in technology demand central to global economic growth.
Shipments of dynamic random access memory fell 24.7% from a year earlier in August, compared with a 7% decline in the previous month, according to data released by the trade ministry.
DRAM accounts for almost half of Korean exports of memory chips, and works with processors and other types of semiconductors to store and process information in a wide range of electronics.
Samsung Electronics Co and SK Hynix Inc, both based in Korea, control roughly two thirds of the world’s memory market. Their revenues were hit in 2019 when the memory-chip industry entered a bust cycle.
Korea’s tech exports, which account for a third of the country’s total shipments abroad, fell 4.6% in August, separate data from the ministry showed. Smartphones, displays and computers all declined in shipment value as consumer demand slackened, the ministry said.
A growing number of indicators suggest the world chip industry is cooling after years of a boom on pandemic demand for electronic devices such as laptops and tablets. Rapid central bank policy tightening to curb inflation is also fueling concerns of a recession.
The US-based Semiconductor Industry Association said earlier this month that global chip sales rose 7.3% from a year earlier in July, the seventh month of deceleration. Separately, the lead times for semiconductors were down again in August, according to Susquehanna Financial Group.
Economic slowdowns in China where the government is imposing strict Covid controls are another reason for the cooling. Tech exports to China fell 14.4% in August, the ministry said, pointing to the Shanghai lockdown among key factors.