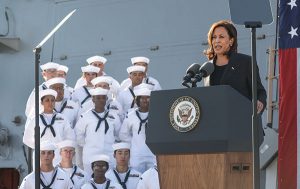 North Korea fired two short-range ballistic missiles into waters off its east coast, ramping up tensions a day before US Vice President Kamala Harris is set to visit the demilitarized zone that divides the two Koreas.
The launches took place from the Sunan area near Pyongyang’s international airport at around 6:10 p.m. and 6:20 p.m. respectively Wednesday, South Korea’s Joint Chiefs of Staff said in a statement. “The ROK and the US are closely cooperating and maintaining our fully prepared posture,” it added, referring to South Korea by its formal name.
The missiles reached an altitude of about 30 kilometers (18.641 miles) and flew about 360 kilometers (223.69 miles) with the speed of Mach 6, JCS said. South Korea “strongly condemns” North Korea’s provocation, it added.
The launch is the second barrage fired by North Korea this week and adds to the record number of ballistic missiles it has shot off this year. On Sunday, it fired a short-range missile into waters off its eastern coastline — its first launch since a single-day record of eight in June.
Harris is set to visit the DMZ Thursday and become the first senior Biden White House official to go to the buffer zone where masses of troops are positioned on either side.
The visit comes as Kim has ignored US calls to return to stalled nuclear disarmament talks and appears ready to conduct his first test of a nuclear weapon in five years.
Hours before the latest launch, Sung Kim, the US point man for North Korea, underscored the Biden administration was open to dialogue. He called on Pyongyang to “engage in serious and sustained diplomacy,” according to a State Department statement late Tuesday in Washington.
North Korea has a habit of timing its provocations to political events. The latest launch also takes place as the USS Ronald Reagan arrived in South Korea for joint drills and about a month after the US and South Korea held the Ulchi Freedom Shield — their biggest joint military exercise in about five years. North Korea has bristled fordecades at the joint military exercises, calling them a prelude to an invasion.
South Korea’s spy agency told lawmakers Wednesday that North Korea completed construction on Tunnel No. 3 in the Punggye-ri nuclear test site, indicating that it may conduct its seventh nuclear test sometime between Oct. 16 and Nov. 7.
“It appears that North Korea conducted a martial protest against Harris’ South Korea visit, sending a fresh warning to Biden administration,” said Ji Seong-ho, who defected from North Korea to South Korea, where he’s now a member of the national assembly.
So far in 2022, the North Korean leader has fired off more ballistic missiles than in any other year of his decade in power. He has tested rockets designed to evade US-operated interceptors, increasing the threat of a credible nuclear strike against the US and its allies in Asia.
Pyongyang is also seeking to miniaturize warheads for potential tactical strikes and build more powerful weapons for its missiles that could carry a warhead to the US mainland.
The US push to isolate Russia over Vladimir Putin’s war in Ukraine, coupled with increasing animosity toward China, has allowed Kim to strengthen his nuclear deterrent without fear of facing more sanctions at the UN Security Council. There’s almost no chance Russia or China, which have veto power at the council, would support any measures against North Korea, as they did in 2017 following a series of weapons tests that prompted former President Donald Trump to warn of “fire and fury.”
The two countries in late May vetoed a UN Security Council resolution drafted by the US to ratchet up sanctions on North Korea for its ballistic missile tests this year.
Pyongyang also recently denied it sold weapons to Russia in an unusually direct statement, blasting the US over “rumors” that Kim’s regime was aiding Putin’s war.
China this week reopened its main train route with North Korea after a five-month hiatus due to Covid, a potential boost to Kim Jong Un’s sanctions-battered economy.