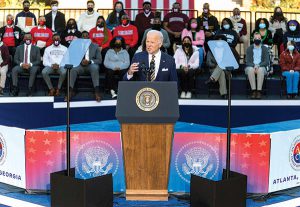 President Joe Biden said Russia will “pay a heavy price” if any of its forces move across the border into Ukraine after earlier suggesting Western allies might struggle to react to a small-scale attack.
As the top US diplomat meets Russia’s foreign minister in Geneva, Biden said he has issued clear warnings to Russia’s President Vladimir Putin, who has amassed about 100,000 troops at the border with Ukraine despite denying any plans to attack.
“If any, any assembled Russian units move across the Ukrainian border, that is an invasion,” Biden said in comments at the White House. Such a move would bring a “severe and coordinated economic response that I’ve discussed in detail with our allies as well as laid out very clearly for President Putin. There is no doubt— let there be no doubt at all that if Putin makes this choice, Russia will pay a heavy price.”
The president’s remarks continued efforts to clarify his response to a reporter’s question at a White House news conference, when he said the US and its allies had yet to agree on how to hold Moscow accountable over “a minor incursion.” The president also said of Putin, “my guess is he will move in, he has to do something.”
The remarks risked undermining weeks of escalating warnings from American diplomats and prompted White House aides to clarify — before Biden had even finished speaking — that any troop movement across the border would prompt “a swift, severe, and united response.”
The mixed messaging comes as Europe and the US have been unable to hash out detailed responses to various scenarios that Russia might pursue in Ukraine, and options like sending Nato troops to the country aren’t on the table.
Ukrainian President Volodymyr Zelenskiy made clear that Biden’s remarks on weren’t received well in Kyiv. “We want to remind the great powers that there are no minor incursions and small nations. Just as there are no minor casualties and little grief from the loss of loved ones,” he said in a tweet.
White House Press Secretary Jen Psaki said that “high-level” US and Ukrainian officials “have been in touch,” though she added that Biden has not spoken to Zelenskiy since his news conference. “They certainly understand from those conversations what the president meant,” Psaki told reporters at a briefing. “You saw the president make a statement or convey clearly his point of view this morning, which is reflective of exactly what he said, most importantly, to President Putin.”

GOP Criticism
The president’s initial comments also drew heavy criticism from key Republicans. Senate Minority Leader Mitch McConnell said the president “telegraphed passivity and weakness exactly when our allies can least afford it.”
In a second week of urgent diplomacy over the Ukraine crisis, the top US and German diplomats met in Berlin, warning that any Russian aggression against Ukraine would trigger a serious economic response. Secretary of State Antony Blinken and German Foreign Minister Annalena Baerbock delivered the warning after a four-way meeting in Berlin with counterparts from France and the UK, a show of unity amid Russia’s buildup of troops on its border with Ukraine.
“We urgently call upon Russia to take steps to de-escalate,” Baerbock said. “Any further aggression on the part of Russia, any further aggressive attitude on the part of Russia would have grave consequences.”