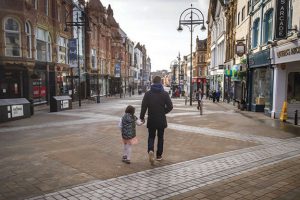 Surging inflation will pile £2,370 ($2,900) on to the bills of the average UK household this year, according to a new study, raising fresh pressure on the Bank of England (BOE) and government to step up their response to the cost of living crunch.
With wages falling behind price gains and the government raising taxes, the report from Bloomberg Economics predicted inflation-adjusted disposable incomes will drop by around 3.4% this year, the biggest decline on record.
Separately, a Bloomberg survey published on Monday put the chance of a recession at 40%, up from 28% last month and the highest level since January 2021 during the third coronavirus lockdown. Bloomberg Economics is not among those predicting such a recession, but still expects contractions in the current and final quarters.
Such a backdrop likely means a tough time on Monday for BOE Governor Andrew Bailey, when he joins fellow monetary policy makers in testifying before a panel of lawmakers amid signs political criticism of the central bank is mounting for not spotting the inflation surge sooner.
Economists polled last week trimmed their growth forecasts for this year and next, predicted even higher inflation and said the Bank of England will be forced to deliver further interest-rate hikes in the summer before putting policy on pause.
The Bloomberg Economics analysis by Ana Luis Andrade and Jamie Rush is based on a forecast that consumer prices will rise 8% this year, which assumes a 75% increase in the cost of energy, a 22% hike in fuel bills and a 6% jump in food prices. These categories alone account for £1,380, or around 60%, of the increase.
“British consumers face an unparalleled squeeze on real incomes this year and riding the shock out depends on households dipping into savings or the borrowing more,”
said Rush, Bloomberg’s chief
European economist. “In an environment of heightened uncertainty, willingness to do that is low.”
The failure to keep inflation under control is “an issue” even though Bailey is doing a “reasonable job” during difficult times, Business Secretary Kwasi Kwarteng said in an interview with Sky News. Other Cabinet ministers have been more critical in private, the Sunday Telegraph reported.
The BOE has raised rates on four straight occasions to lift its benchmark to a 13-year high of 1%, but Bloomberg Economics is among those to predict it may not tighten in June or August.
That’s at odds with the latest Bloomberg survey, which sees hikes in both months as policy makers battle to tame an inflation rate forecast to peak at over four times their 2% target this quarter.
It would take the benchmark to 1.5% -– 25 basis points higher than previously forecast. Rates are then expected to remain on hold for a year, a more dovish outlook than implied by money markets where traders are pricing in almost 2.5% by May 2023.
“The combination of the cost of living shock, geopolitical uncertainty, and global monetary policy tightening should result in a material softening in household consumption and a marked terms of trade shock over the coming quarters,” said Sanjay Raja, chief U.K. economist at Deutsche Bank AG.
Chancellor of the Exchequer Rishi Sunak is also facing calls to deliver measures, especially to support low-earners who take the brunt of the pain given food and energy account for a bigger share of spending at the bottom end of the income distribution than at the top.
Benefit payments will not reflect the recent increase in costs until 2023, implying a significant squeeze for many. Sunak last week blamed technology for the failure to plug the gap and said in an interview with the Sunday Express that he will do “everything in his power” to help struggling Britons.
Some households do have a cushion in the form of a pandemic-era buildup of savings, which Bloomberg Economics estimates at about £187 billion, or more than £6,500 per household.
Wages also grew an annual 4% in the three months to February and Bloomberg expects an average of 4.5% this year, more than double the average in the decade prior to the pandemic. But that is still about half the rate of inflation.