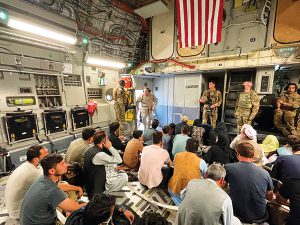 India said it evacuated 104 people, mostly Afghans, by a special chartered flight from Kabul that landed in New Delhi.
The evacuated people included those from the Afghan minority community, who carried holy scriptures of Sikhism and some ancient Hindu manuscripts, the Ministry of External Affairs said in a statement. India has so far evacuated 669 people from Afghanistan.
In 2019, Prime Minister Narendra Modi’s administration passed a law that
prioritised citizenship for undocumented Hindus, Sikhs, Buddhists, Jains,
Parsis and Christians
from neighbouring Muslim-majority countries of
Pakistan, Bangladesh and Afghanistan, describing them as persecuted
minorities.
The government has also sent medical supplies to be distributed at a children’s hospital in Kabul by the World Health Organization, according to the statement.