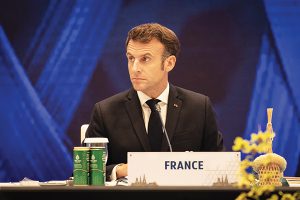 French President Emmanuel Macron’s government was expected to outline changes to immigration laws, testing whether it can navigate divisions among political factions that have been accentuated by a spat with Italy over a migrant boat.
Prime Minister Elisabeth Borne will present plans to the National Assembly that would overhaul the asylum system, giving more undocumented workers legal status while putting in place tougher rules to deport others.
“This is a very important bill that aims to better integrate those who want to integrate in the French Republic,” Interior Minister Gerald Darmanin said on France Info radio. “It also aims to expel people who don’t respect our laws.”
Immigration is politically risky terrain in France that has traditionally divided leftist and right-wing groups Macron brought together in his centrist party. But that grouping lost its absolute majority in elections earlier this year, meaning Macron will need to build a coalition to get changes approved in a vote.
The president’s government would likely turn to the conservative Republicans, but taking a tougher line on immigration would test the support of more left-leaning lawmakers in his own party.
Meanwhile, the Republicans have criticised Macron’s decision to allow a boat of migrants to dock in France when Italy refused, saying it could set a dangerous precedent.
Darmanin, who allied with Macron in 2017 after quitting the Republicans, said several tens of thousands of undocumented workers in sectors with labour shortages could be eligible for temporary legal status under the new rules, but those with a criminal record would be excluded. The bill would also streamline the asylum process and strengthen measures for deporting foreigners. “We are not for or against immigration,” Darmanin said. “The question is what kind of immigration.”