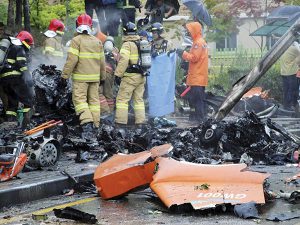 Five people were killed on Sunday in a helicopter crash in the eastern coastal county of Yangyang in South Korea.
Yonhap news agency quoted fire officials as saying that the chopper, an
S-58T, crashed on a hill around 10:50am local time, while surveying the area against forest fires.
The helicopter was smashed into pieces and burst into flames, but the fire is unlikely to spread, as it has mostly been put out, they said.