Erdogan threatens attack on US ally in Syria to seal border 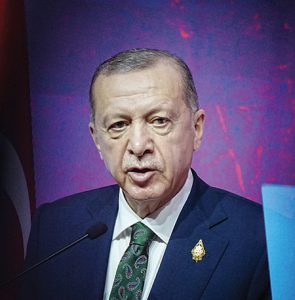 President Recep Tayyip Erdogan on Wednesday threatened to start a long-suspended offensive against US-backed Kurdish forces in Syria to push them further from Turkey’s southern border.
The Turkish leader spoke as his country’s warplanes and artillery kept pounding positions of Kurdish YPG militia it holds responsible for a deadly bomb attack in Istanbul last week and cross-border shelling of Turkish border towns.
Erdogan said the US and Russia hadn’t fulfilled pledges to force the militia to withdraw from the border as mandated under deals reached in 2019. Turkish troops would expand areas under control along the frontier, he said.
“If they cannot keep their promises and fulfill the requirements of the agreement, we have the right to take care of it ourselves,” Erdogan told lawmakers. “Our determination to seal all of our southern borders with a security strip, leaving no possibility of attack on our country’s lands, is stronger than ever.”
The US and Russia have urged Turkey to avoid escalating violence in northern Syria in a way that could threaten existing cease-fire agreements. In 2019, Ankara hit the brakes on an earlier planned Syria foray following separate cease-fire deals with the US and Russia, which both have forces stationed there.
Erdogan’s threat of a new assault may help him consolidate nationalist support ahead of elections next year.