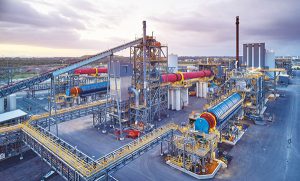 Pilbara Minerals Ltd, one of Australia’s biggest lithium producers, plans to build a demonstration plant in Western Australia capable of refining the material that’s key to the booming global battery metals market.
The pilot plant would process Pilbara Minerals’ hard-rock ore into lithium salt near the company’s Pilgangoora Project in Western Australia, in a joint venture with Australia’s Calix Ltd that uses the latter’s patented “calcination” technology.
It’s part of a push by Canberra to boost the country’s onshore lithium refining industry, responding to demand from carmakers in the US and Europe for battery metals that bypass China. Australia is the world’s biggest producer of the metal with almost half global supply, but currently exports no refined lithium chemicals.
A growing number of lithium producers are moving into refining in Australia, including US company Albemarle Corp, China’s Tianqi Lithium Corp, and Wesfarmers Ltd. Most aim to produce battery-grade lithium hydroxide, which could be sold to battery manufacturers ready to use, but none are yet operating at commercial scale.
Pilbara Minerals plans to manufacture a less-refined, easier-to-produce chemical that would be more durable than lithium hydroxide, but would need further processing before it could be used in batteries.
A final investment decision on the demonstration plant is targeted for the first half of 2023, the two companies said in a joint regulatory filing, adding they were in discussions with the Australian government for a A$20 million ($13.4 million) grant. If successful, the technology could be scaled up to commercial levels and potentially licensed to third parties, they said.
Pilbara Minerals’ shares closed down 0.9% in Sydney on Monday after dropping 17% over the previous two weeks.