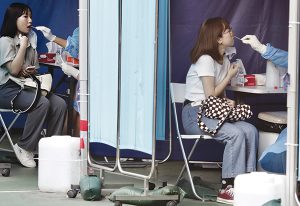 China’s economic activity slumped in November and could drop further in coming weeks as Covid outbreaks spread across the country and protests against tighter virus restrictions escalate.
Bloomberg’s aggregate index of eight early indicators showed a likely contraction in activity in November from an already subdued pace in October. With Covid cases spreading rapidly in each of China’s provinces now and major cities like Guangzhou, Beijing and Zhengzhou imposing new restrictions to limit residents’ movements, the outlook remains grim.
Economists at Goldman Sachs Group Inc, Macquarie Group and Hang Seng Bank say chances are rising of more disruption to growth as authorities struggle to minimise Covid infections and deaths while gradually easing restrictions. Demonstrations erupted in cities like Beijing and Shanghai over the weekend as residents vented anger against the virus controls.
The central bank is ramping up its stimulus to bolster economic growth as analysts downgrade their forecasts further. The economy is expected to expand just 3.3% this year, the latest Bloomberg survey shows, which would be the slowest pace since the 1970s, excluding 2020’s pandemic slump.
The People’s Bank of China said it will reduce the reserve requirement ratio for banks by 25 basis points effective next week. That would inject 500 billion yuan ($70 billion) of liquidity into the economy, enabling banks to extend more loans to businesses hit by Covid disruptions. More concerted steps have also been taken recently to bolster the property market, currently in its worst downturn on record.
Bloomberg’s early indicator index was at 3 in November, the lowest level since April and May, when the economy almost ground to a halt during Shanghai’s lockdown.
Small businesses are already feeling the damage. Service industries contracted for a second straight month in November, falling to the worst level since May, according to Standard Chartered Plc. Domestically focused firms were worse off than export-orientated companies, and expectations fell too.
Standard Chartered’s survey of more than 500 small and medium enterprises showed that the accommodation and catering sector fell the most in November followed by declines in wholesale and retail, along with real-estate sales.
The spread of the virus is also affecting industrial production. Riots at an iPhone
factory in Zhengzhou show
the disruption caused when businesses try to maintain
operations.