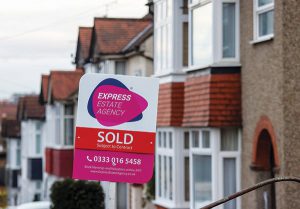 The UK’s bleak economic outlook and rising interest rates are finally biting into the country’s housing market, the latest figures from Britain’s lenders show.
NatWest Group Plc reported net mortgage growth of £3.3 billion ($4 billion) in the second quarter, down from £3.6 billion in the same period last year. Barclays Plc reported near stagnant growth in home loans earlier this week while Lloyds Banking group sees property prices falling in the year ahead.
Property prices in Britain have soared to record levels over the past two years, with many buyers chasing bigger homes away from city centers as the Covid-19 pandemic struck. Banks have in turn enjoyed brisk business in mortgages, albeit with slim margins while the base rate was at rock-bottom and lenders competed fiercely to pour capital into home loans.
NatWest’s economic assumptions still contain a base case of 2% house price growth next year. Yet Lloyds, the UK’s biggest mortgage lender, thinks higher interest rates along with the squeeze on household budgets will lead to falling prices.
Lloyds said its open mortgage book rose just 1% in the three months through June and now stands at £296.6 billion.
Barclays, meanwhile, saw £0.5 billion of mortgage growth to £159.6 billion in the three months to June, a 0.3% increase from the equivalent figure at the end of March.
For now, there’s a rush to lock in rates before the Bank of England’s expected series of hikes to combat inflation, forcing UK lenders to pull some mortgage products to avoid being overwhelmed by surging demand.
Mortgage approvals fell more than forecast in June while unsecured debts rose, according to Bank of England data. Lenders authorised 63,726 home loans, down 3% from May and the fewest in two years.
Back in September, borrowers could get a five-year fixed rate mortgage at under 1%, but now most rates start at around 3%, Boulger said.
“In the next six months it’s going to slow right down,” he said. “Higher interest rates haven’t been a big factor up to now but will be a big factor going forward.”