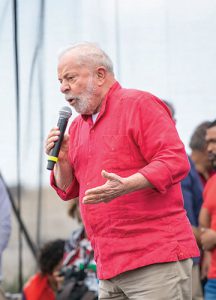 The front-runners in Brazil’s presidential election are seeking support in the country’s most populous state, where the polling gap between them has narrowed in the last days of the campaign.
President Jair Bolsonaro attended an event in Campinas, one of the biggest cities in Sao Paulo state, in the morning, before taking part in a televised debate Saturday night. Meanwhile, former President Luiz Inacio Lula da Silva, who is not participating in the debate, held two rallies in the state’s capital. After leading a motorcycle rally in Campinas in the morning, Bolsonaro spoke to a crowd while aboard a sound truck, repeating his pro-gun agenda and calling his opponent a thief. Amid concerns about abstention rates, Lula urged people present at his two campaign events to vote on October 2 and promised better jobs, schools and health care.
Lula’s lead over Bolsonaro among Sao Paulo state’s voters is at 7 percentage points, according to a Datafolha poll released this week, less than the 10-point advantage reported a week earlier. That is a smaller gap compared with a national poll also conducted by Datafolha, which shows Lula with 47% and Bolsonaro with 33%.
Both candidates are focusing on populous regions of the country in the week before the election day. Bolsonaro is continuing to reach out to female voters, while Lula is facing a tough fight with his opponent among evangelical groups.