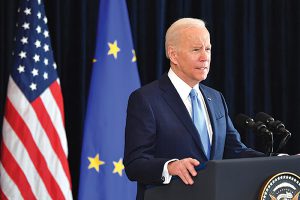 The last time a US president visited Seoul in 2019, Donald Trump and Kim Jong-un agreed to restart nuclear talks during an impromptu meeting at the heavily fortified demilitarised zone (DMZ).
As Joe Biden prepares to land in Seoul on Friday, the White House hasn’t indicated he’ll be heading to the DMZ. There’s also little he can do to convince Kim to return to the negotiating table as the North Korean leader prepares to launch another intercontinental ballistic missile (ICBM) and possibly conduct his first nuclear test since 2017.
The US push to isolate Russia over Vladimir Putin’s war in Ukraine, coupled with increasing animosity towards China, has allowed Kim to strengthen his nuclear deterrent without fear of facing more sanctions at the UN Security Council. There’s little chance Russia or China would support any measures against North Korea, as they did in 2017 following a series of weapons tests that prompted Trump to warn of “fire and fury.”
Although North Korea remains poor, and is facing its first widespread Covid-19 outbreak, the nation has shown it can survive under the current set of economic penalties and won’t come running for sanctions relief, according to Kang Mi-jin, a North Korean defector who now runs a company in South Korea that watches the economy of her former home.
“There’s zero incentive for Kim Jong-un to return to high-stakes nuclear negotiations in return for economic incentives,” she said.
“Nuclear weapons have
now became an essential tool for the survival of Kim’s regime survival. It’s not a bargaining chip for economic sweeteners.”
The White House has largely avoided stern reactions to Kim’s latest tests, including an ICBM launch on March 24. New South Korean President Yoon Suk Yeol has also offered an “audacious” package of aid for nuclear disarmament.
Sung Kim, the US special envoy for North Korea, last month said the administration hasn’t received any response from North Korea to repeated invitations for a dialogue without preconditions.
“We hope that the North Koreans will accept our invitation to engage in a serious and sustained dialogue,” Sung Kim said. “We are willing and prepared to address any serious concerns that they may have about their situation on the peninsula.”