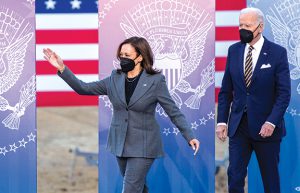 President Joe Biden said he thinks Vladimir Putin doesn’t want a full-blown war but will “move in” on Ukraine after amassing 100,000 troops on its border, part of an extraordinarily blunt assessment of Russian intentions and the West’s likely response.
“I’m not so sure he has — is certain — about what he’s going to do,” Biden said of his Russian counterpart during a nearly two hour-long news conference marking his first year in office. “My guess is he will move in, he has to do something.”
While the president said the US and its European allies are united on making sure Russia faces “severe economic consequences,” Biden acknowledged what his top aides have so far said only in private: that Nato allies are divided about what to do if Russia takes action against Ukraine that falls short of an invasion.
“I think what you’re going to see is that Russia will be held accountable if it invades,” Biden said. “And it depends on what it does. It’s one thing if it’s a minor incursion and we end up having to fight about what to do and not do.” If Putin chooses to continue or ramp up cyber attacks on Ukraine, Biden said, “we can respond the same way, with cyber.”
Biden’s mixed messaging on Ukraine will be seen by his political opponents and some adversaries as giving Putin a green light to, at the very least, continue harassing behavior against Ukraine.
Representative Michael McCaul of Texas, the top Republican on the House Foreign Affairs Committee, said in a statement that “rather than promising to act only in the event of a major renewed invasion, what is needed is strong US leadership to rally a punishing response to Vladimir Putin’s aggression right now.”