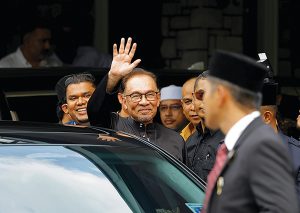 Anwar Ibrahim, the almost man of Malaysian politics, finally clinched the country’s premiership after decades of waiting. Now, the reformist leader must make sure that he keeps the job.
That won’t be easy in a nation that’s now had four prime ministers in four years. Former finance chief Anwar is likely to control an unstable majority and his administration looks set to include his longtime nemesis, the graft-tainted United Malays National Organisation. That may prove an obstacle to policy making and could easily bring his government down.
Anwar, 75, will also have to steer an economy that’s on the most fragile of rebounds at a time of surging inflation and living costs. He will also face pressure from an opposition dominated by an increasingly popular hardline Islamic party.
The elections have opened up “multiple religious and racial faultlines” across the political landscape, said Tan Teng Boo, chief executive officer and managing director of Capital Dynamics Asset Management Sdn. in Kuala Lumpur. Anwar’s biggest task will be to “ensure that these faultlines don’t erupt.”
Here are some of the challenges that Anwar and his government will confront in the months ahead:
Power-Sharing
The first test will be who gets what in Anwar’s new government under a power-sharing formula. Anwar will have to appease the majority Malays and UMNO while keeping traditional coalition allies happy. That could see a bloated cabinet as he seeks to ensure that the different parties each have roles.
“Malaysia’s new cabinet should not be too big like the previous cabinet,” said Awang Azman Awang Pawi, an associate professor with the Academy of Malay Studies at Universiti Malaya. “Anwar needs an efficient and trusted cabinet.”
Pakatan Harapan, Anwar’s coalition, mentioned two deputy prime ministers in its manifesto, including one from the underdeveloped but resource-rich states of Borneo. An UMNO leader such as Ismail Sabri Yaakob, the former prime minister, or ex-Defense Minister Hishamuddin Hussein might also be put forward as a deputy premier to help keep the party within Anwar’s government.
The center-left Democratic Action Party, which holds the largest number of lawmakers in Anwar’s bloc and has the support of minorities, may take a back seat on cabinet deliberations to ensure unity and to counter the polarizing narrative that it’s anti-Malay. During its short time in federal government, DAP controlled the finance and transport portfolios.

Uneasy UMNO
UMNO, linchpin of former ruling bloc Barisan Nasional, is beset by infighting and there’s a push to remove its chief, Ahmad Zahid Hamidi, who’s also the Barisan boss. The politician pushed for snap polls that saw BN lose significant ground in Malay-dominated regions and was instrumental in pushing for the coalition to be part of Anwar’s government.
UMNO will hold its general assembly on December 21, which may see Zahid lose his job.